Let's get Messy - Art and Crafts for children of all ages

Meet up with other members for drinks and a chat

OTHER EVENTS AROUND BRABANT AND THE NETHERLANDS

A brand new international festival in The Hague, the European Life I Live celebrates the richness and diversity of

European culture. See what you can expect at the event here: www.thexpat.tv/v/the-europ

This year’s theme is ‘The Hague Masters’. Concert locations include the Peace Palace, Nieuwe Kerk, Dr Anton Philipszaal, Paleiskerk and Koorenhuis in The Hague and Kasteel Duivenvoorde in Voorschoten. www.denhaag.nl/en/residents/to/International-Chamber-Music-Festival-3.htm

The Prinsjesdag is the official opening of Dutch parliament. View the tradition on the street, from the grandstand or join a VIP tour. At 13:00, the Queen is driven in the Golden Coach from Noordeinde Palace to the Ridderzaal (Hall of Knights), Binnenhof. Here the Queen reads the Troonrede (Speech from the Throne), written jointly by the Ministers and Secretaries of State, outlining the government’s financial plans for the coming year. The day is concluded with the balkonscène, where the Royal Family appears on the palace balcony to address the public.www.denhaag.nl/en/residents/to/Prinsjesdag-2012-Princes-Day.htm

Come and admire the most exquisite and extraordinary kites from all corners of the world and be inspired by the top class professional kite shows, or try it yourself! See  www.denhaag.nl/en/residents/to/International-Kite-Festival-in-Scheveningen-3.htm

Around 100 of the most important prints from the museum's own collection. They date from between 1890 and 1905 and include works by Bonnard, Vuillard, Denis, Steinlen and Toulouse-Lautrec.

World famous impressionist paintings from the Hermitage in St Petersburg are shown together with works by their predecessors, contemporaries and successors, to give a clear insight into the many currents in the turbulent French art scene between 1850 and 1900.

The list of artists in the exhibition includes Delacroix, Rousseau, Daubigny, Monet, Pissarro, Renoir and Sisley, Cézanne and Gauguin.

From September 29, these artists will be joined by Van Gogh when a large part of the collection of the Van Gogh Museum will be relocated to the Hermitage, including 75 highlights, works on paper and a selection of the letters.

Film by the Sea

The international film festival where literary adaptations take centre stage. This year there is also a programme under the title Film and the Law for which a jury of lawyers put together the 25 best films. The top five, all of which will be screened, are 12 Angry Men, Judgement at Nuremberg, The Merchant of Venice, El Secreto de sus Ojos (The Secret in Your Eyes) and In the Name of the Father.

As well as film screenings, the festival also has a full programme of courses and symposia.

The theme for this year's festival is Sea and You and among those taking part are the Artemis Quartet, the Goeyvaerts Trio, the singers Andreas Ottensamer and Christianne Stotijn and the Choir of King's College.

Among the highlights are Gavin Bryars soundscape The Sinking of the Titanicand Verdi's Otello with tenor Aleksandrs Antonenko and conducted by Valery Gergiev.

De Doelen and other venues, Rotterdam, September 7 to 15.

A Dutch-language production of Disney's stage musical based on its animation film The Little Mermaid. It has a wonderful Ariel, a perfect Prince and effects that turn the stage into the bottom of the sea. The story is so well-known, it's worth seeing for the merpeople and fish swimming about the stage.

Ideas for the home and garden, the latest trends and experts offering advice, demonstrations and workshops. The fair covers literally everything, from lamps and watering cans to wooden flooring and wallpaper.

Following a great deal of adverse criticism about the health problems caused by intensive breeding of some breeds of dog, the organisers of these international dog show are emphasising the health aspects of the judging.

Dogs will be judged for best in breed and for best in show. There are also stands offering advice on breeding and care and a wide range of dog-related products.

Email ThisBlogThis!Share to TwitterShare to FacebookShare to Pinterest
Labels: Around Brabant, Out and about 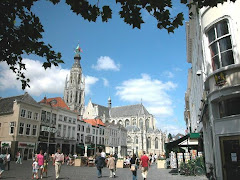 Other websites in the Netherlands